In the tradition of Iyengar yoga it is usual that the invocation is chanted at the beginning of classes at the Ramamani Iyengar Memorial Institute, Pune.

The sage Patanjali is the author of the Yoga Sutras, one of the classical yoga philosophy texts. We chant this invocation to Patanjali to honor the ancient tradition of yoga and the lineage of yoga that we practice.

Geeta Iyengar describes another reason for reciting the chant: “We chant so that at the very beginning that feeling of sanctification comes from inside, with the feeling of surrendering oneself, because nothing can be learned in this world unless you have the humility to learn.”

(From an interview of Geeta Iyengar by Margo Kitchen, RIMYI, 1992.) 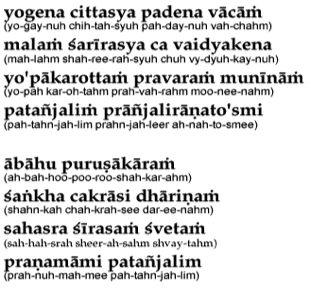 Let us bow before the noblest of sages Patanjali,
Who gave Yoga for serenity and sanctity of mind,
Grammar for clarity and purity of speech, and
Medicine for perfection of health.
Let us prostrate before Patanjali,
An incarnation of Adisesa,
Whose upper body has a human form
Whose arms hold a conch and disc, and
Who is crowned by a thousand-headed cobra

Sign-up to our newsletter to get get up dates from the centre:

The new Maidstone Iyengar Yoga Centre is perfect it has easy access near the railway station and bus stops. The centre has excellent clean facilities with up to date teaching equipment and very professional and friendly teachers.

I have spent my entire life enjoying walking, running and cycling and have found in more recent years that I have become less agile and easily breathless. I started Iyengar Yoga in January and within a few weeks started to notice a big difference. I now continue to enjoy my outdoor pursuits with ease, I have less aches and stiffness and increased lung function.

How our virtual site works

HOW IT WORKS PRE-RECORDED Log in and book a class from the timetable as you would normally do Just before class begins, go to the Dashboard section and under “Your Virtual Events” click...

You can contact us via the enquiry form below, which goes straight to our customer service team, or you can use any of the following methods: